Cleaning Up the World: Memories of Vermont's First Earth Day

While reporting for the Bennington Banner, I had the opportunity to cover Vermont's first Earth Day in April 1970. Locally, the environmental faithful gathered that morning in Barn 1 on the Bennington College campus to help kick off the day's events with a frank discussion on the future of the planet.
Three keynote speakers meant three different viewpoints. Harvey Carter, then a young Republican lawmaker from Pownal, called for community action to influence legislation and elect candidates concerned with the emerging crisis. Local business leader Joseph E. Joseph urged better education and more constructive use of technology. And conservationist John Bischof said the key was each individual's commitment to change society, "even if we have to choose voluntary poverty."
When Bischof explained that he was an organic farmer, the response was a round of applause. "The individual can change society," he said. For me, that related to a "visual pollution" project I had covered for the newspaper. David Wasco, a student at the high school who would later become a production designer for major Hollywood films, was collecting photos for a display of Bennington's visual deficiencies, things like poorly designed buildings, bad locations, inadequate maintenance, and trash piles. It was original, individual, the kind of thing that often can make a difference.
Several Vermont communities participated in what had been billed as a national "day of concern." At Middlebury College, Governor Dean Davis, Lt. Governor Tom Hayes and Attorney General Jim Jeffords -- Republicans all -- led a discussion of environmental problems with students and teachers. In Montpelier, Vermont College hosted a two-day observance that began with a speech by the governor on "The Aspects of Pollution." The second day featured classes, films, and more speakers, culminating in a talk by Reinhold Thieme, the former Vermont Commissioner of Water Resources who recently had been appointed a deputy assistant in the Interior Department.
Taking the lead from Green Up Day, a campaign to clear roads of litter, Vermont College students demonstrated the scale of the problem by piling all the garbage normally collected at the school in one week inside a wire mesh enclosure.
Carter was skeptical about Green Up, claiming it had been "cooked up" by the governor's assistant Al Moulton, and even questioned the effectiveness of pending legislation. Mentioning the Pure Water Act, which gave the Water Resources Board authority to set standards, he noted that it also gave the Board the ability to set low standards and permit temporary, or even permanent, pollution of streams. "I had to have the law amended to protect water near Readsboro," he explained.
Vermont had recently adopted what was lauded as the most effective package of environmental controls in the country, a model for other states. It was becoming fashionable to be an "environmentalist," especially after mercury was discovered in most of Vermont's waterways. Developers were meanwhile exploiting quick money by developing leisure home tracts, while the attorney general hinted at an organized crime connection.

Politicians, many of whom hadn't heard of ecology a year before, now lined up to pass laws that they claimed would save the state from pollution and threats to the land. The heart of the package was the creation of nine district environmental commissions that would watchdog pollution and control development. Echoing Richard Nixon, Governor Davis called it a chance to "apply our creative localism theory."
Some lawmakers said the new laws weren't strict enough. As David Scribner wrote at the time, "They pointed to certain loopholes, argued that they were drafted without consultation with environmental experts, did not adequately coordinate various state agencies, and particularly, that they excluded a determination of what environmental damage was incurred by government projects."
To many people, the state land use map proposed by the governor looked more like a blueprint for development than a means to define an environmentally sound approach to growth. Beneath the veneer of environmental concern lurked attitudes and assumptions that could open the way toward an ecological crisis down the line.
"The thinking is that we can manage the environment, create problems, and then use technology to solve them," Carter charged. "That is sheer nuttiness."
The Earth Day discussion with Carter, Joseph and Bischof was followed by workshops, with both civil disagreements about whose approach was safest and practical ideas for developing a more self-sufficient community. Despite the prevailing optimism, one participant did predict, "A catastrophe is going to occur."
BE, a new environmental group also based in Bennington, was already working on an ecological survey, with longer-term plans to act as an information center for residents with questions and concerns. Students were meanwhile preparing a personal ecology handbook.
Dartmouth College took the opportunity that day to announce a new Environmental Studies Program that would bring students "to grips with the problems of controlling and reversing the damaging encroachments of modern man and technology upon the Earth's ecology." To be co-directed by geology professor Charles Drake and public affairs professor Frank Smallwood, the program was expected to involve significant research and interdisciplinary undergraduate courses as a supplement in traditional major fields.
During his talk, Carter called Earth Day "a safety value," and hoped to see more "in terms of political action," specifically support for candidates "concerned with the environment." Joseph, president of the Bennington Brush Co, was more skeptical, calling Earth Day "an intellectual approach to the problem. While the community may know what it means, that's as far as it goes."
A campaign to "clean up the world" requires consistent leadership, the businessman argued. "Children in school must be taught not to pollute. All you have to do is drive around the community to see how people live and will continue to live, unless a catastrophe occurs." It was a surprisingly grim outlook.
About a month after covering Earth Day, I left the Banner and went to work for Bennington College as Publications Director. It was the end of a semester marked by environmental engagement and escalating political action. You couldn't visit the school without hearing phrases like resist the draft, zero population growth, and "man is an endangered species." Best of all, I arrived in time to meet Kurt Vonnegut -- and hear him issue this sharp, funny observation in his commencement address:
"The majority of people who rule us, who have our money and power, are lawyers and military men. The lawyers want to talk our problems out of existence. The military men want us to find the bad guys and put bullets through their brains. These are not always the best solutions -- particularly in the fields of sewage disposal and birth control."
It does capture the mood. But so does another slogan seen around campus that year.
"The rich and powerful are killing all the butterflies.
"If your children are to see butterflies you must be a revolutionary and yourself take control of your life and its surroundings."
Forty-seven years later, both outlooks still sound relevant. And Earth Day is still being celebrated. 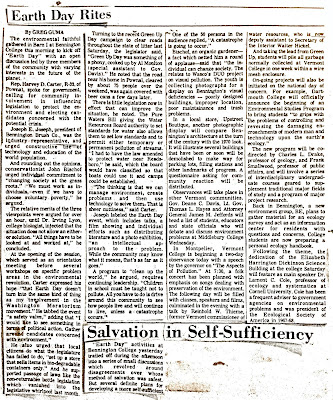