It was quite a time... nuclear disaster at Three Mile Island, Vermont legislation to decriminalize pot, and new alliances rising across the state. In early April 1979, as flaks and officials said evacuation was “unneeded at this time,” 200,000 people were leaving their homes. And as everyone was told a meltdown could be avoided, it was already happening...

The Vermont legislature came close to decriminalizing pot with a bill to reduce the possession penalty to $100. But it stalled after State Police spokesmen warned of calamities — fires, car accidents, weed-fueled homicide! “...its very nature requires that it burn in order to be used,” noted Major James Ryan at an April public hearing. Not anymore.

Claiming pot was “involved” in fatal fires and deadly auto mayhem, Ryan urged lawmakers to take his word that reduced penalties would be “taking away the only deterrent we have.” A year earlier decriminalization had passed in the Vermont House. But Sen. Chester Scott derailed that push with a floor speech about weed as the “doorknob to hell.”

Things got even worse after that. 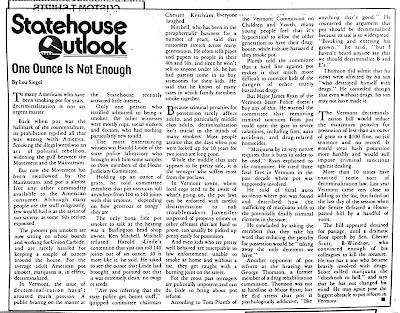 We had just started running a weekly national news column in the Vanguard Press when the Three Mile Island nuclear plant went critical. John Dillon and I produced stories for page 2, but we also covered the issue in Nation — and in the entertainment section. Even today, the list of worst “incidents” is startling.

Along with covering the activist angle, a second item noted that Vermont’s US House Rep. James Jeffords had introduced a bill calling for “a moratorium on construction and licensing of new plants until a review of all ‘significant health and safety questions’ has been completed.”

In Listings, the TV Highlights column reported, “Staying better than 24 hours behind what was happening, the networks preferred to let the fallout spread throughout the U.S. via charts, graphs, and experts’ opinions on radiation destruction instead of responsible reporting on evacuation procedures that were being carried out on Sunday and Monday, and not reported by the TV press.” Only ABC handled the disaster with some perspective, mainly because anchor Frank Reynolds showed a “true sense of concern for the people he reports on.” 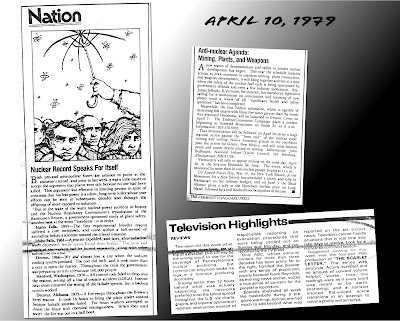 One version of the Three Mile Island meltdown was that a valve got stuck, coolant tank discs ruptured, and staff tried to manually stop water replacement. But, as I reported less than a week after, pumping in cold emergency feedwater pushed a toxic gas bubble into the reactor core. And the core’s exposure led to damaged fuel rods and melting uranium. Ultimately, after pump seals also failed, the gas was released.

It was a major disaster. But another one was the early government response. At first only a few thousand people were advised to evacuate, then more and more. And was there actually a meltdown? “Part of the reason that things appeared to improve was that less was being told to the public.” 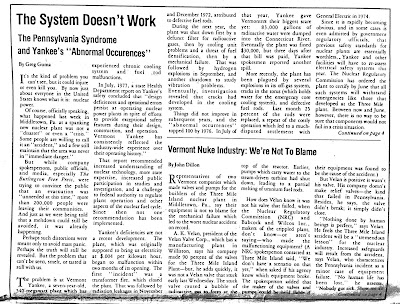 As J.D.’s story revealed, Vermont companies that made valves and pumps for nuke plants were quick to deny responsibility. Velan Valve was making 90 percent of the valves, yet the company’s president was sure it wasn’t one of theirs. The NRC wasn’t so certain: “We don’t have a scenario on that yet,” a spokesman said.

Hayward Tyler Pump Co, making 50 percent of the pumps used by the nuclear industry at the time, was just as sure about its innocence. But manager Dave Woodcock was not so enthusiastic about the future of nuclear power. Hayward Tyler was already diversifying — to pumps for other industries and water desalinization in Saudi Arabia and Africa. “Nuclear power is not going away,” he predicted, but it’s also “the riskiest means of generating electricity.” Gee, thanks for the warning. 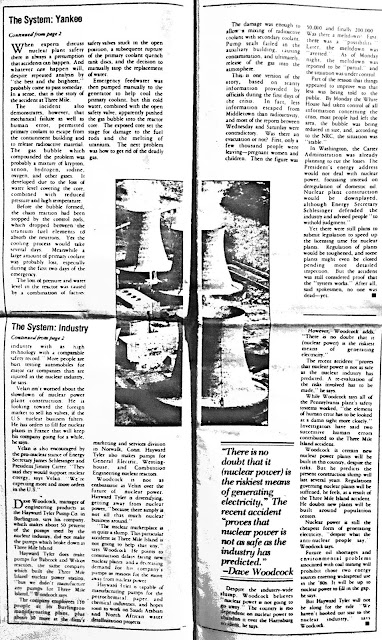 The Week That Was

Selecting events for the Vanguard’s weekly calendar spread could be tough, given the space limits of the design. But it looked cool! My favorite listing from 40 years ago this week is “Money and You,” an all-day workshop with “new age millionaire Marshall Thurber,” who had recently established an institute in Vermont to cash in on the human potential movement. He’s still at it. 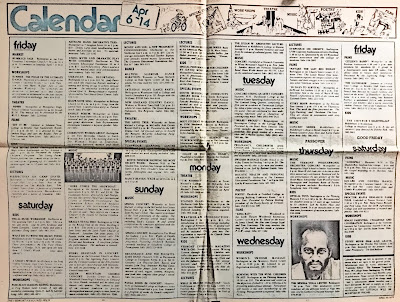 The editorial column, which ran on page 3, focused on marijuana decriminalization in Vermont and nuclear issues surrounding the Three Mile Island meltdown in Pennsylvania. On pot, we concluded that “it is high time for a change.” In reality, it took almost 40 years.

On nuclear power we discussed technical dependence and media complicity in “news management.” Our proposals included “developing local expertise” to handle future emergencies, seriously discussing decommissioning Vermont Yankee, and suspending future plant construction nationally “until the questions surrounding this risky route to energy ‘self-sufficiency’ are resolved. We will probably find, just as the anti-nukers have been saying for years, that this so-called peaceful atom represents an unacceptable risk.”

That took over three decades but Vermont ultimately did decide to close its plant. Now the nuclear questions surround soon-to-arrive F-35s in Burlington. 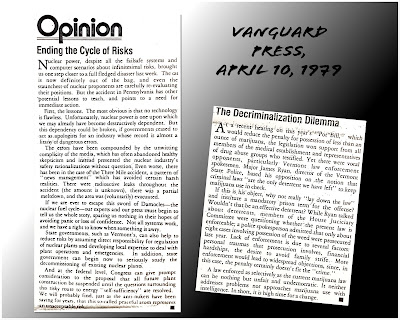 
The Vermont Alliance changed direction in 1975, becoming a multi-issue, direct action community organizing effort. Its first focus was Barre — during a utility municipalization drive. By early 1979, when this cover story appeared, Vermont’s new “voice for the voiceless” had also established grassroots chapters in Hartford, Winooski, Bristol, Vergennes and Brattleboro. An early sign of progressive things to come. 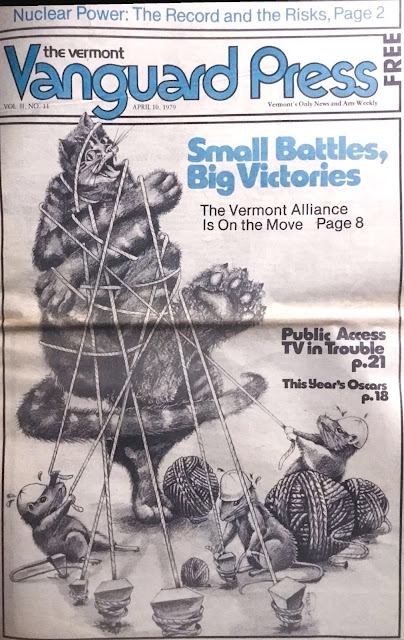 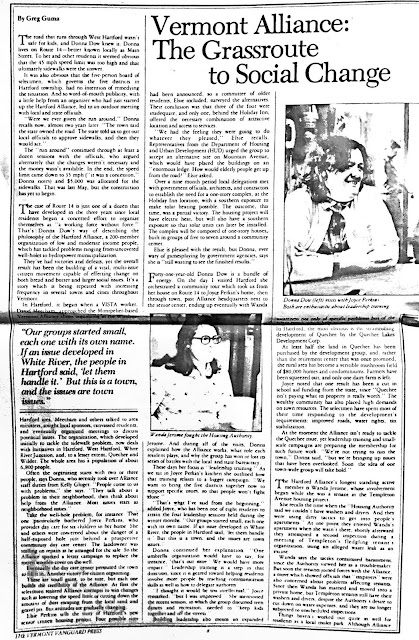 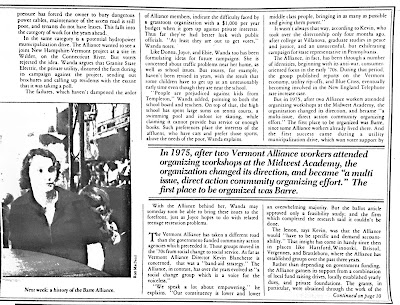 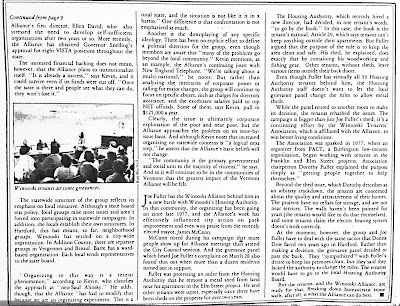