The Road from Republic to State

After 14 years as an independent republic Vermont became the 14th U.S. state and officially entered the union on March 4, 1791.
Editor’s note: This essay is adapted from The Vermont Way: Restless Spirits and Popular Movements, Greg Guma's forthcoming study of the state’s evolution and influence.
Vermont emerged from the American Revolution in the best economic condition of any former colony. It had no state debts, and since the Continental Congress had refused to admit it as a member state, no responsibility for the national debt. 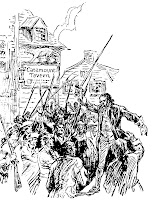